Get Help
LibrariesWriters in the Library

It is our great pleasure to be hosting poet, essayist, scholar, and more, LeAnne Howe, for our next Writers in the Library Reading Series Event! You can find out more at our website or on our Facebook or Twitter pages!

LeAnne Howe: You left out scholar. I also produce literary scholarship in my field, Native American literatures.  Hubris made me say this, forgive me.  But to answer your question, I truly never think about what kind of work belongs in a certain genre. I’m more comfortable letting the work choose how it wants to be experienced in the world. Sounds a bit wacky, but that’s how I work.  I start out writing what I think will be a poem and it turns into drama and fiction.  That’s how Savage Conversations was born; it began as poetry, now it’s a drama for the stage, and at the same time it’s poetry.

My literary ancestry began with the stories my grandmother and great aunts told at family gatherings.  Storytelling came first.  I was also a journalist for several years, so literary scholarship seemed a reasonable creative move.  My career has been a Tribalography, my term, for the way American Indians tell stories (in multiple genres).  And one thing leads to another.

The affect of writing in multiple genres is that I manage to stay busy.  At this time, I’m working on a new documentary film, Searching For Sequoyah. The website is now up  http://searchingforsequoyah.com/. This summer in Toronto, Canada we go into rehearsals for a new play I’m co-authoring with Monique Mojica, Sideshow Freaks and Circus Injuns.  We are performers in the show.  Monique is a wonderful actress, teacher, and playwright.  We also have many Native collaborators from the Southeastern tribes.  The show is scheduled to open on August 24, 2017.  I’m also finishing a novel this semester.  Again, the affect on my creative life is that I am busy, but I don’t think this is much different than most artists.

JR: In addition to writing as much as you do, you’re the Eidson Distinguished Professor at the University of Georgia. How does teaching relate to your writing life?

LH: I’m very fortunate.  Teaching and research are a creative symbiosis for me.  My teaching is fueled by my research interests.  And vice versa.

JR: You’re known as a writer who writes humor exceptionally well. What do you think the role of humor is in writing today?

LH: Humor disarms the reader, disarms an audience.  I use it to help readers enter a Native story without feeling guilty about the genocide that was enacted against our ancestors, our tribe, and families.  And I’ve always wanted to be thought of as a female Will Rogers pointing out ironies and absurdities for a bilious public.   Hubris made me say this, forgive me.

JR: Your most recent book, Choctalking on Other Realities, concerns your experiences traveling the world and representing American and Native identities abroad. In that collection, you write: “Native stories are power.” Yet, too frequently, Native writers are left out of conversations about contemporary American literature. What recent Native writers’ works do you admire and wish had a wider audience?

LH: I’m very interested in the work of Tommy Pico, a Native poet. I’m reading IRL, his first book of poetry.  But really, I could name 57 Native writers and most people will never have heard of them, or read their work.  Perhaps it is our invisibility in the literary world.  Recently I was talking to a group of people about Louise Erdrich’s work.  They’d never heard of her.

JR: Your newest project, Savage Conversations, centers around Mary Todd Lincoln’s claims that a “savage indian” would torture her each night while she was in an insane asylum in 1875. How has writing about this topic affected your concern regarding how Native stories are represented in American history?

LH: We’re not represented at all.  We get about a paragraph (so to speak) in U.S. student’s K-12 education and we’re represented as past tense, dead.  All gone.  Alas.

Historians and authors interested in the Lincolns knew about the period in Mary Todd Lincoln’s life in which she blamed an Indian spirit for her madness.  But they ignored it.  Why?  This is the question I asked when I began researching Mary Todd Lincoln.  It felt very much like the 1995 case of Susan Smith from South Carolina who blamed a black man for kidnapping her children.  People may remember that Smith killed her children then claimed a black man drove off with them in her car.  Both women blamed the “Other” for their insanity.  The “why” question is something I try and answer in the book.

Working on Savage Conversations has given me insights into how a President’s wife in 1875 imagined American Indians.  She imagined us as savages.  It helped me consider that perhaps Abraham Lincoln thought Dakota Indians were savages.  He ordered the execution of thirty-eight Dakota Indians for participation in the so-called Dakota Uprising in 1862 in Minnesota.  I don’t agree that just because he spared the lives of over 200 other Dakotas that this is an indication of mercy, or that he saw them as human beings.  That’s not what he says.

Come hear LeAnne Howe read from Choctalking on Other Realities Monday, February 6th in the Hodges Library Auditorium at 7PM. We look forward to seeing you there!

LeAnne Howe, the Eidson Distinguished Professor at the University of Georgia, connects literature, Indigenous knowledge, Native histories, and expressive cultures in her work. Her interests include Native and indigenous literatures, performance studies, film, and Indigeneity. Professor Howe (Choctaw) is the recipient of a United States Artists (USA) Ford Fellowship, Lifetime Achievement Award by the Native Writers’ Circle of the Americas, American Book Award, and an Oklahoma Book Award, and she was a Fulbright Distinguished Scholar to Jordan. In October 2015, Howe received the Distinguished Achievement Award from the Western Literature Association, (WLA); and in 2014 she received the Modern Languages Association inaugural Prize for Studies in Native American Literatures, Cultures, and Languages for Choctalking on Other Realities.

Jeremy Michael Reed is a PhD student in Creative Writing at the University of Tennessee. His poems are published in Public Pool, Still, Valparaiso Poetry Review, and elsewhere. More of his work can be found here.

Published by the University of Tennessee Athletic Department to provide articles and statistics on a variety of sports. 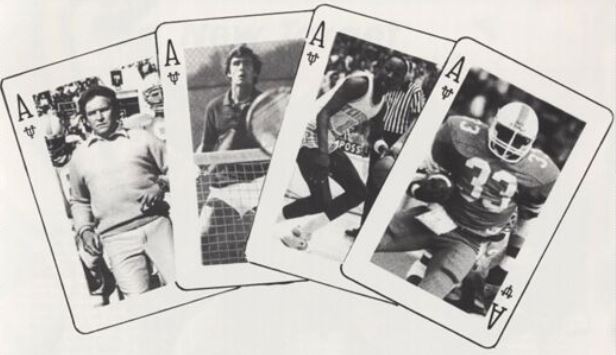