University Libraries and the department of Modern Foreign Languages and Literatures co-hosted the annual Día de los Muertos/Day of the Dead celebration! Participants joined in the colorful festivities, learned and immersed themselves in Hispanic history and culture, and supported students!

Participated in the International Festival on Friday, September 30th on the Pedestrian Walkway as reported by the Daily Beacon.

Lunch & Learn – Our Lives Are Not Disposable: The Erasure and Disrespect of Disabled Women

Many students you will encounter on the university campus are dealing with the added challenges of autism, ADHD, learning disabilities, intellectual disabilities, or mental health issues. And university staff are committed to removing barriers to their success.

The UT Libraries’ Diversity Committee invites you to lunch with the Harlem Quartet. This very special, in-person reception with members of the renowned string quartet will be limited to 30 attendees at 11 a.m. to 12:15 p.m. on Tuesday, March 22, in room 270 of the Student Union.

The Department of Modern Foreign Languages and the Libraries Diversity Committee hosted a Day of the Dead celebration where altars created by UT students were set up on Friday, October 29, 2021. 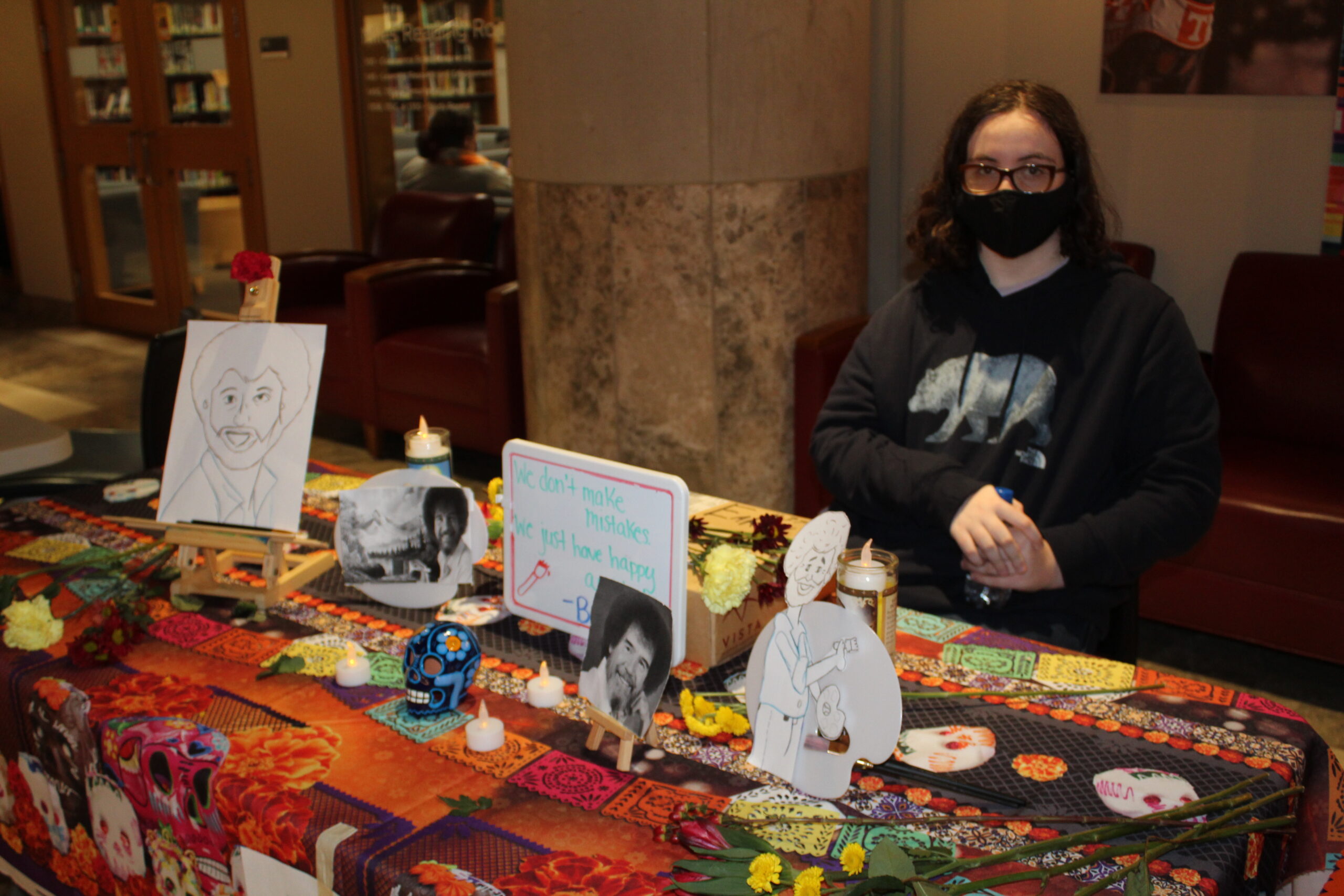 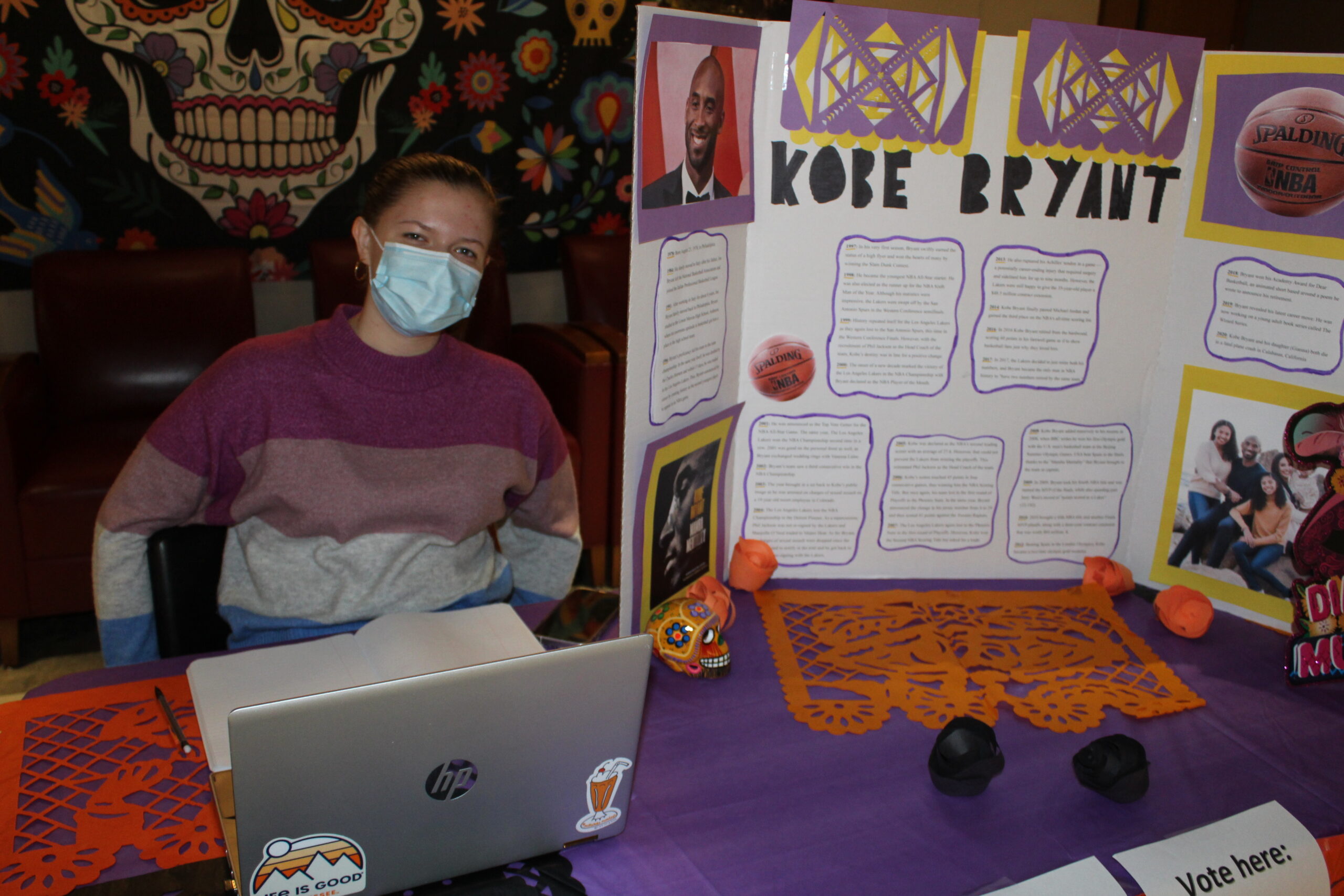 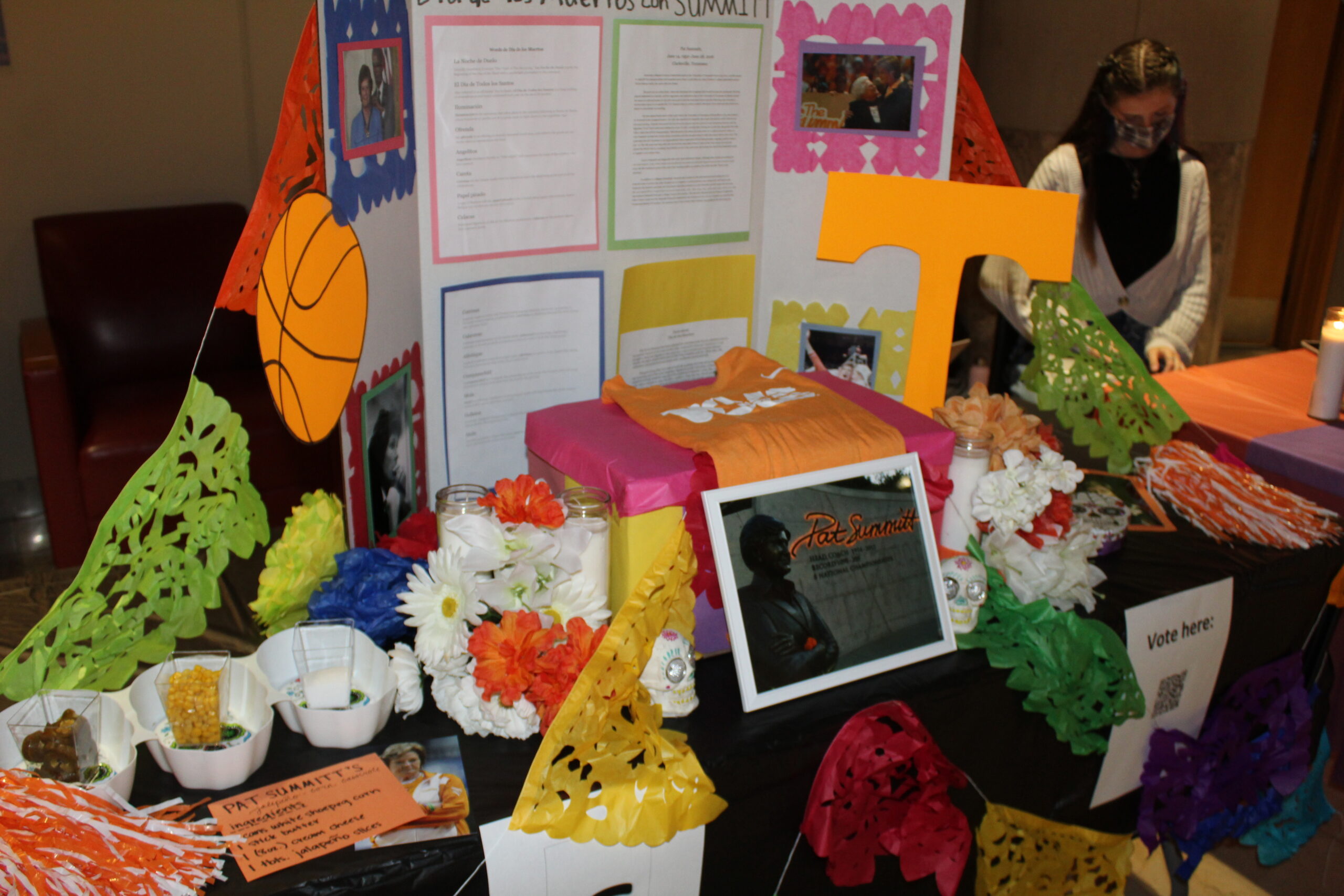 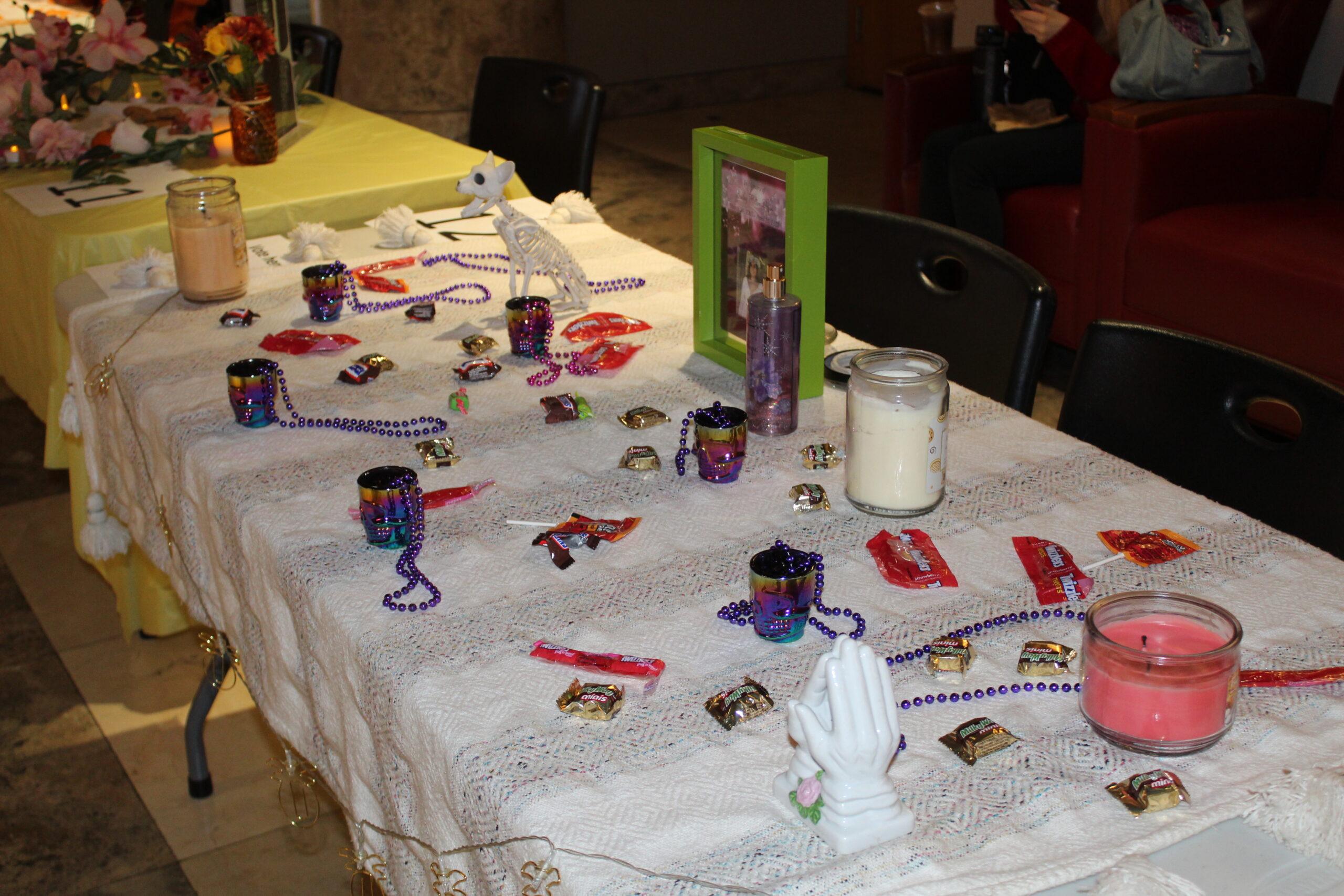 The Libraries Diversity Committee will be participating with a booth at the UT International Festival organized by the International House. Join us on the pedestrian walkway to celebrate international cultures with food, music, dance, art, and other activities. Stop by the Libraries booth to learn about where our international students are from and where our students travel to and sample candy from these cultures.

Day of the Dead

Join the Department of Modern Foreign Languages and the Libraries Diversity committee to explore altars to honor the dead created by UT students and vote for your favorite.

The Libraries Diversity Committee will be participating with a booth at the UT International Festival organized by the International House. Join us on the pedestrian walkway to celebrate international cultures with food, music, dance, art, and other activities. Stop by the Libraries booth to learn about where our international students are from and where our students travel to and sample candy from these cultures.

The CCI Experience Diversity Banquet is an annual event hosted by the Diversity Student Leaders Society. The purpose of the banquet is to provide an inspirational diversity experience for students, faculty and all others in attendance. The banquet also raises funds to support the college’s Diversity and Inclusion Program.

UT Libraries Diversity Committee members Michelle Brannen, Anne Hulse, Thura Mack and Megan Venable were invited to present at the 11th annual Black Issues Conference on Saturday, February 6, 2016. Their presentation, titled “Is What You See What You Get: Truth Lies, Marketing and Diversity on Campus” was held before a standing-room-only audience of 35 attendees.

Members of the UT Libraries Diversity Committee attended the 2015 College of Communication and Information’s Experience Diversity Banquet on February 20, 2015. Held at the Bearden Banquet Hall, the purpose of the banquet is to provide an inspirational diversity experience for students, faculty and all others in attendance. The banquet also raises funds to support the college’s Diversity and Inclusion Program.

The 2015 Experience Diversity Banquet CCI Diversity Award recipient is Dr. Tom Kim, founder and director of the Free Medical Clinic of America based in Knoxville. Dr. Kim is a passionate advocate for those who cannot afford medical treatment and has started five free medical clinics to serve their needs.

The 2015 Keynote Speaker is John Onuoha, an inspirational speaker/performer and a graduate of the United States Air Force Academy. He is currently director of project/product portfolio management at OptumInsight, a UnitedHealth Group Company in St. Louis, Missouri.

“Standing your ground: Do online conversations matter or make a difference?”

On February 7, 2015, members of the UT Libraries Diversity Committee (Anne Hulse, Cathy Jenkins, Megan Venable, Michelle Brannen, Thura Mack and Jessie Abernathy) were invited to present at the 10th Annual Black Issues Conference at the University Center. Their presentation titled “Standing your ground: Do online conversations matter or make a difference?” was given to an audience of about 20 students and included participation by Vice Chancellor for Diversity Rickey Hall. The UT Libraries Diversity Committee has participated in the Black Issues Conference for several years.

Tour and Overview of Libraries’ Assistive Technologies and Equipment areas

The Diversity Committee staffed a table at UT’s International Festival on April 11, 2014. The festival is sponsored by the International House, and our theme this year was Disability Resources.

The Library hosted this training session offered by UT’s Employee & Organizational Development on February 11, 2014. The training uses activities and discussion to encourage participants to reflect on their own attitudes about gender and sexuality and to become aware of different forms of discrimination faced by LGBT individuals.

“I hate it when….I would like it if….”: Scandalous College Stereotypes

The Diversity Committee presented a session on February 1, 2014 entitled “‘I hate it when… I would like it if…’: Scandalous College Stereotypes.” Attendees explored college stereotypes through games and activities with the hope of increasing awareness of the impact stereotypes have in our community.

What comes to mind when you hear someone called a thug, a jock, or a gangster?  What about the absent-minded professor or the ghetto bird?  You may have thought you broke free from stereotypes in high school only to find they’ve followed you to college.  Join us as we look at stereotypes, how they may affect you, how you may inadvertently be misunderstanding others, and what you can do to break out of the mold.  In this session, attendees will participate by exploring college stereotypes through games and activities with the hope that we can increase awareness of the impact stereotypes have in our community.

Beyond college stereotypes – The Secret is Out….

The UT Libraries Diversity Committee sponsored a team for this event which took place on October 26, 2013, and raised the second highest amount of money for a team in the race.

The Diversity Committee organized a salad bar lunch on October 3, 2013 for library staff to help raise funds for the Libraries’ Race for the Cure Team.  Staff participated in a raffle for prizes, and we were able to raise over $1,000 for the team.

The VolAware Street Fair was October 2, 2013. The Diversity Committee participated with an activity for students to create their own stress balls and by promoting our DeStress for Success activities.

On May 23, 2013, the Diversity Committee hosted a Cookie-Bakeoff and Meet-and-Greet for the UT Libraries. Staff members were invited to bake their favorite cookie recipe, share the recipes with others staff, and vote on their favorite cookie. In a close race, Regina Mays won the majority of votes with her Lemon Cake Cookies. Cathy Jenkins came in second place, and Nicole Carney came in third. At the event, we also featured highlights of the Diversity Committee programs as well as our new website.

On April 19, 2013, the Diversity Committee set up a booth at UT’s International Festival. The table featured recipe cards from the Libraries Special Collection’s Cookbook Collection. Our food theme was Southern recipes.

During National Library Week April 14-20, 2013, a display was set up to show appreciation for UT Libraries.

The University of Tennessee College of Communication and Information held its fifth annual Experience Diversity Banquet on February 22, 2013 at Bearden Banquet Hall in Knoxville. The keynote speaker and recipient of the 2013 CCI Diversity Award was Knoxville Mayor Madeline Rogero.

T Cooper’s Real Man Adventures was the subject of the Common Ground Book Club on February 19, 2013. Library Dean Steve Smith led the discussion of this comic look at the author’s transsexual journey.

Librarians presented information on the Human Library at the Black Issues Conference on February 2, 2013 to UTK students, faculty and staff. A discussion was led about the meaning and impact of titles. Plans were shared about the future of the program in 2013 and 2014.

The members of the committee volunteered to set up a table on January 13, 2013 at the Race Against Racism. It was presented for the Association of Dr. Martin L. King Jr Commemorative Commission celebration.

Citizenship Display at the University Center

In January 2013, the Library Diversity Committee created a Citizenship Display in the University Commons as part of our Culture Corner program. Works and materials from UT Library displays were presented with the hopes of encouraging a dialog regarding what makes a good citizen.

The Things They Carried was discussed at the Common Ground Book Club on November 14th, 2012 in the Commons South, Hodges Library. The book, written by Tim O’Brien, is a series of stories about a platoon of American soldiers in Vietnam.

Through a Solider’s Eyes – a video-slide show of photographs collected from veterans and exhibited in Hodges Library. Professor Baldwin Lee, working with the Howard H. Baker Jr. Center for Public Policy and the UT Center for the Study of War and Society, has been collecting photos from soldiers and assembling them into an exhibit. The photos may also be published as a book.

Volunteers Say Thank You —Faculty, staff and students were given red, white and blue sticky notes to write “thank you” messages to veterans which were posted to a six foot 2D model of the word “Volunteer” located on the 2nd floor of Hodges Library. 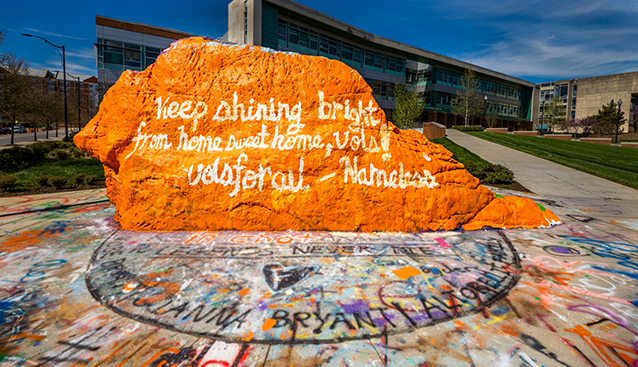